THE design philosophy of these postwar homes is simple: Put the family room in the rear, as far as possible from the street with windows facing the backyard, so that a working man can come home after a hard day, close out the world and spend time with his wife and children.

This layout was a signature element of many homes in Levittown, the housing development on Long Island that was created after World War II by Levitt & Sons to provide returning G.I.’s with affordable homes and the chance to put a war behind them and focus on domesticity.

A theatrical approximation of that family room might have sufficed for the production of Marc Palmieri’s play “Levittown,” running at the Theater at St. Clement’s through Aug. 1. But Michele Spadaro, the scenic designer, decided to suggest the architecture of the entire house. A few interior rooms, out of sight of the audience, are not fully realized, but for the most part her set is a scale-model Levittown ranch with an expandable attic, circa 1950.

“When I heard the reading, I just saw the set,” Ms. Spadaro said, referring to her first encounter with the play in March. “I didn’t know the exact details, but as stage directions were read, I just saw it.”

Her first goal was to figure out how to best re-create a Levittown home. A Los Angeles native who worked there as a set decorator, art director and scenic artist in film and television before moving to New York in 2001, she was unfamiliar with the layout. After an online search turned up pictures and floor plans of some of the 800-square-foot houses, she said, she quickly noticed their dramatic possibilities.

“We all began talking about what the design should be, and Michele said that the house was implicitly theatrical,” said George Demas, the play’s director and the founding artistic director of the producing company, the Cliplight Theater, as he, Ms. Spadaro and Mr. Palmieri sat in a dressing room beneath the stage. Upstairs a crew was hard at work on the set.

Since the script discusses the home design and the Levitts’ philosophy for it, Ms. Spadaro said, she thought it was important to explore the entire house. The characters “can’t really escape from each other,” Ms. Spadaro said. “Even though it was this sort of utopian ideal of a flow-through plan that was modern and wonderful, the other result of that is that there are very few places that anyone can actually go.”

There is some autobiography in Mr. Palmieri’s play, a domestic drama about a Levittown family’s fractured relationships and the repercussions of a long-buried secret. The playwright’s grandfather was injured in World War II and, though the situation was traumatic and he saw others die, he rarely talked about his experience. After all, forgetting was part of the Levittown lifestyle. Mr. Palmieri wondered how burying one’s past might affect a person’s family, and “Levittown,” which juxtaposes the familial closeness intended by the home design with a more dysfunctional reality, was borne from these musings.

After the March reading Ms. Spadaro immediately signed on to design the set. She had worked with Mr. Demas before  they met when he was an understudy and she the props designer for “Orson’s Shadow” in 2005 and also worked together on the current Off Broadway production of “Our Town” (he is in the cast, and she designed the set)  but they had never collaborated as director and designer. When Ms. Spadaro suggested to Mr. Demas and Mr. Palmieri (also a founding member of Cliplight) that she approximate the entire house, she didn’t think they would approve. “George said, ‘I want you to design whatever you see,’ ” Ms. Spadaro said, “and I thought in the back of my head, ‘Sure, O.K., fine.’ ” She offered to discuss scaled-down versions to save money, but Mr. Demas and Mr. Palmieri insisted she carry out her initial plan.

While Mr. Palmieri sought to supplement the shoestring budget with a donation of lumber from Home Depot in East Meadow, N.Y.  an effort that was successful  Ms. Spadaro worked on her design, starting with the floor plan of an original Levittown ranch house. “I just used a brick for scale and estimated all of the interior details,” she said. When the team later visited a real Levittown house, Ms. Spadaro learned that her estimates were almost dead on. “A lot of things I didn’t have to change at all, and some things by just an inch or two,” she said.

Just as she proved accurate with her measurements, Ms. Spadaro turned out to be right about the set’s dramatic qualities too. “With Michele’s set and time to think about it, I did work on the script,” Mr. Palmieri said. He and Mr. Demas, who had been working on “Levittown” together for a few years and staged a workshop of it in 2006 at Axis Theater, discovered new freedom. “It’s a whole different thing where you have the opportunity to have an actor exit a room and the audience can still see that character,” he said. “It gave me a lot more opportunities and George a lot more opportunities to apply things we had been talking about for years.”

The set affected the show’s themes as well. Could a person returning from a war really transition into familial happiness because of architecture, or are the experiences that go undiscussed going to resurface in harmful ways?

“In this house no one ever really leaves eyeshot or earshot, and that’s part of this claustrophobic thing that brings people together,” Mr. Demas said. “But it also causes people to put up defenses. It’s very interesting to see how a home affects the way relationships develop and personalities develop.”

Tips to Illuminate the Exterior

Mon Apr 27 , 2020
Outdoor Lighting Design of your home is a major part of a good outdoor design. Though it may not seem important to some homeowners, you could achieve a greater looking home with proper management of exterior lights. If you need more inspiration for your landscape lighting design, catch Genevieve Gorder on […] 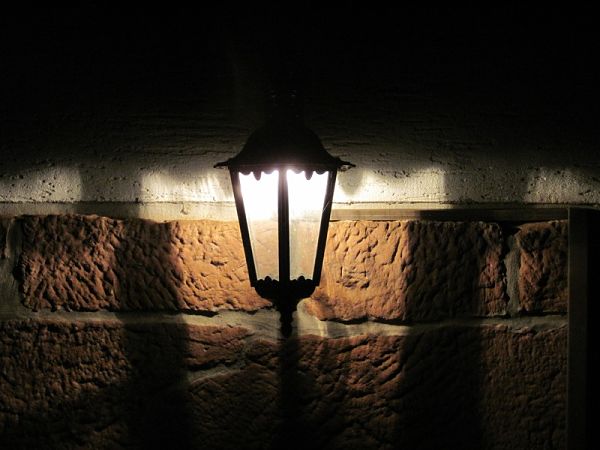