The last time I met with Ivy Ross was at the top-secret design lab that she built for Google, where the company has given technology a soft, living room-friendly touch with products such as the cloth-covered Nest Mini assistant and the knit-wrapped Pixel phones. But today, as the two of us connect on Zoom from our respective homes, it’s clear a lot has changed during this year of COVID-19.

Ross just hosted a small, socially distanced backyard wedding for her daughter and reports going into the lab just three to four times in the last several months when absolutely essential. “I’m staying creative from a laptop . . .we are 98% productive,” says Ross of her team. “We’re making physical stuff, which is really hard. Sometimes there’s no substitute; we have to be around a table holding something.”

Like many of us, Ross—a VP and head of product design at Google—has sunk into a rhythm with work-from-home life. Unlike many of us, she actually leads a team that designs future products for the home. And to preview her panel The New Dynamics of the Home at this week’s Vitra Summit, Ross and I discuss what she’s anticipating for COVID-19 and post-COVID-19 life at home.

The rise of flexible homes

“What this has shown us is things can change in the blink of an eye. And what we’re going to want to do is be more prepared for flexibility. What was our home has to become an office or a schoolroom,” says Ross. “So how do we build in the most flexibility into our environments so they can accommodate different modes of being?”

Ross points out that this question isn’t entirely new. She references the preponderance of interior design projects which have managed to cram a lot of functionality into micro-apartments. That trend includes MIT’s CityHome project—which spun off to be an independent company called Ori. Ori builds robotic modules that can shift partitions through the space, reveal a bed on command, and hide away your closet whenever you aren’t picking out clothing.

“Design is about solving problems. So I’m very excited about some of the ways I’ve seen them being solved,” says Ross. “[Like] a dining table that can collapse and become a desk, but also has a way of popping up a privacy screen. I think we’ll see a lot more multifunctional objects.”

The (partial) closing of open spaces

Related to flexible design: Open offices and open home floor plans have both been the rage for years. But as social distancing has proven paramount, COVID-19 has already challenged the open office, and Ross imagines that the same thing is happening to open homes—though only to an extent.

Indeed, one report puts the average cost for a small business to redesign its space at $200 per square foot, meaning retrofitting a single room can cost tens of thousands of dollars. It seems unlikely that in this economy especially, a majority of businesses will be able to readily reconsider their full layout. But individual items could help, especially if they can come into your life without cluttering it up.

“[At Google] we are looking, not just at furniture but how can [all] things be multiuse?” says Ross. “Can you do with less things that do more?” Expect that same thinking to make its way into products for the home.

The quest for not just comfort, but balance

For Ross, the current moment is not just a public health crisis, but an existential one, which calls into question our core values, and how those values play out in the environment around us.

“Did we go too far in all of these things?” she asks. “Too far in modernism, too far in open offices, too cold . . . can you find the balance between the simplicity of modernist forms and the familiarity of more organic, natural shapes in cozy materials?”

To some extent, it’s an argument that Ross has been making for years at Google, as she’s pushed the development of softer, tactile designs—while largely eschewing the temptation to embrace the maximalism that’s been bubbling up in the high-design world for years (before COVID-19 put an end to that, too).

That said, her criteria are to make things “that make you feel something when you look at it. Have a visceral reaction,” she says. But she doesn’t want you to be shocked, or challenged, like you might be by art. It seems more that she wants you to be nurtured or enriched. “I think, balance is where it’s at in everything. This is the universe’s way of saying, ‘Let’s find it.’”

Case in point: In 2019, Ross debuted an installation at the Milan Furniture Fair called A Space for Being, which sat people in three different living rooms and gauged their unconscious, neurological response. The idea was not to champion one design above the others but to hopefully teach visitors more about their own selves and how their physiology responded to the colors, textures, and shapes around them.

“Who knew at the time,” muses Ross, “that right now, we’d just be [sitting] in our houses?” 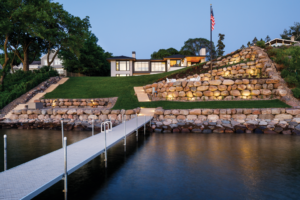