How Do Architects Approach Interior Design in China?

Since the beginning of modernism, countless architects have expressed their architectural theories and concepts through the design of residential interiors. In Vanna Venturi House, Venturi exaggerated the scale of internal components to create a counterbalance to the small house, expressing complexity and contradiction. In Villa Mairea, Alvar Aalto built an ‘imperfect’ home, as a way of rebelling against the strict aesthetic standards of functionalism.

Conceptual and theoretical experimentation of housing interiors in China has had a delayed start due to political influences and differing pace of development. While the birth of communism lead to standardisation, rapid urbanisation and economic rebirth has provided the perfect catalyst for architects to challenge the status quo and conceptualise new definitions of interior and living.

The earliest experiments were avant-garde for the Chinese context, evolving the spatial volume of a home beyond the physical embodiment of daily activities, into a lifestyle. From Pritzker winner Wang Shu and Lu Wenyu’s residence, the 2 LDK home which inverted the idea of an external courtyard into a 50㎡ apartment, to Atelier FCJZ’s vertical glass house using vertical transparency as a direct challenge to the horizontal transparency of Modernism.

What Is Interior Design (And Why Can It Really Make You Feel Better)?

ArchDaily China’s team interviewed 4 architectural offices working in China from a variety of backgrounds, including Atelier FCJZ, Qiuye Jin Studio, Atelier tao+c and maison h, asking them to either define the 4 core components of interior space, or how they transform ‘housing’ to a ‘home’ through their understanding of space and lifestyle within the Chinese context.

Designing In-Out-Door Rooms
At first, it may seem contradictory: A house embracing nature while being an introverted form. In China, however, interior does not necessarily mean indoors. A courtyard in a house can be considered interior, it’s simply a room without a roof. It offers the residents a generous space to carry out diverse domestic deeds while allowing them to enjoy the heavens above and earth below. At FCJZ, we have been trying in various ways to reinterpret this specific spatial proposition – an architectural element that is part of the inside but outside by nature.

For the Split House, a villa is halved to bring a wedge of hillside in between; at the Vertical Glass House, a complete enclosure opens internally by glass roof and floors to connect sky and ground in the middle; while in the Concrete Vessel, this contemporary courtyard house has an open green heart, where the divide between the indoor and outdoor may be totally eliminated. More and more, for us, rooms in a dwelling are not defined by functionality but are a series of spaces with changing degrees of openness or closeness. At the moment we are anxious to see how some of the experiments of in-out-door rooms will turn out as four houses will be completed in Ningbo later this year.

In the typical contemporary room layout in China, one room corresponds to one function. However in small units, rooms have become multipurposed: a bed in the living room, or a washing machine in the dining room. Hierarchy in the living space is now disordered becoming the challenge of small units. Nowadays, the living area per person in Beijing is less than 30 m2, so it is imperative to rethink the layout of small units.

Interior Design for us has 4 key components: partition interface, furniture space, scale, scenes. The traditional Chinese room layout centered on the heated Kang in Northern China: Kang is similar to the ancient “step bed” with its scale larger than furniture but smaller than room. In ancient China, domestic spaces were homogeneous, where the furniture works as barrier of division forming space. When this was transplanted to Japan, the opposite trend developed: the space became furniture. The whole ‘sukiya’ can be seen as big bed. Only in the traditional Chinese room a layout can develop the sense of scale to become a scene from a story, like that of the “Han Xizai Evening Banquet”. Space is porous with many orifices in it, while the walls are only the background of the “furniture space”. Spatial layers are extremely rich. The domestic space thus becomes the garden.

Apart from being rigid and expressionless on the outside, the typical Chinese residence is also often uncomfortable on the inside. It was not conceived to be a home, but conceived merely to be an efficient concrete stack of containers for keeping humans. The original purpose of the Modernist design principles underlying this apartment typology was to provide each house with quality and comfort, by using a standardized, economic, industrial mass construction method. However, in reality, in many regions around the world, the implementation of these modernist design principles lead to an ugly, boring and inhumane architecture.

Interior Design has to have 4 key components: comfort, family, flexibility, storage. This is all well expressed in a project we completed several years ago for Olympic Champion Wu Jingyu and her husband in Beijing. The house was very cluttered when they bought it initially. To maximize the open space and storage of the apartment we moved all the functions to the walls to allow for free movement, light penetration and cross-ventilation. By turning the walls into flexible pieces of furniture with hidden functions and fold-out elements, we could maximize the function and flexibility of the spaces. The choice of materials, the new lightness and cross-ventilation created a comfortable home for all seasons.

The home is an expression of the values you hold dear in life, and this home environment will also shape the mind of your children. And that links to the responsibility and power of architects and designers, to help materialize a responsible lifestyle that can inspire future generations.


SCALE
For most people living in a high-density Chinese city, building is irrelevant to the inhabitants. It is only a predetermined built environment. While home is not a shelter, a scaffold for living, it is more a set of rituals and routines of everyday life surrounded with domestic objects.

We designed several small scale residential interior projects in Shanghai. The design of domestic interior is to materialising a landscape of living into physical space, free from the rigid building regulations, where there is a potential of re-discovery at every single scale and dimension within a private sphere. Through the projects, we re-define every dimension to combine with the object and devices in the space, with the activities and habits of users. The setting and configuration of objects establish the topography and niches of the room, give families a sense of intimacy. In the studio space, we made a compact living box in size of 3.6 x 1.7 meters, in which the necessary functions – bed, shelves, table and a seat nearby the window were combined together. In a U-shaped room, a huge composite piece of furniture forming a free-standing internal structure, built into the depth of the volume, embed all functional requirements. In the library home, the bookshelves, staircase and mezzanine fit within narrow spaces, create many levels of reading spaces and corners for meditation.

What’s important in making a home is location, because a home is our link to our communities. A home must provide comfort, security, and belonging. Where we live is tied to our connections to family, friends and colleagues. PAO’s work in housing aims to ensure that desirable places are accessible to the full range of society.

A location dictates how we design our interiors. We design small and affordable homes in existing communities. These infill projects are in dense locations that are difficult to build. Located in an historic hutong neighborhood in Beijing, Mrs. Fan’s Plugin House is shaped by maximizing space while ensuring access to light, air, and views to her immediate neighbors. While we use a standardized building system, it fits into unique site conditions. Our designs have also been built within the interiors of existing buildings as a way of adapting to an uncertain world. For example, the Shangwei Plugin Houses in Shenzhen were built with government support inside structures where ownership rights remain unclear. Our prefabricated Plugin building system means our homes can be built quickly and also disassembled and reused. The reconstructable aspect of the Plugin House has also allowed us to bring the house to Harvard University and Boston City Hall as a temporary structure. In these locations it helped inform the public of local government interest in encouraging people to build houses in their backyards, within the interior of their property. The purpose is to share residential space with more families to help relieve the high demand for housing in expensive cities.

What Is Interior Design (And Why Can It Really Make You Feel Better)? 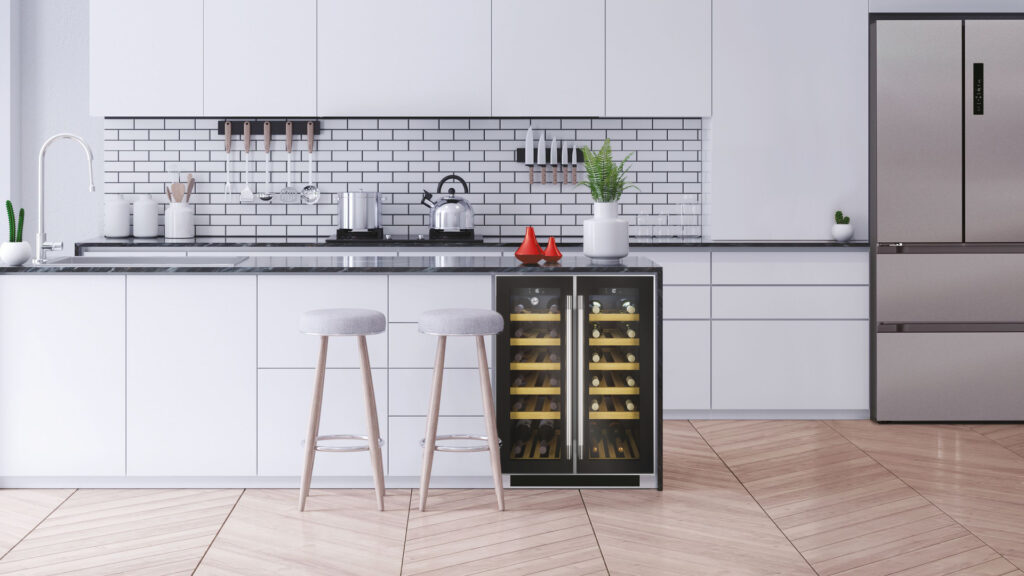 The Best Wine Coolers and Fridges in the UK