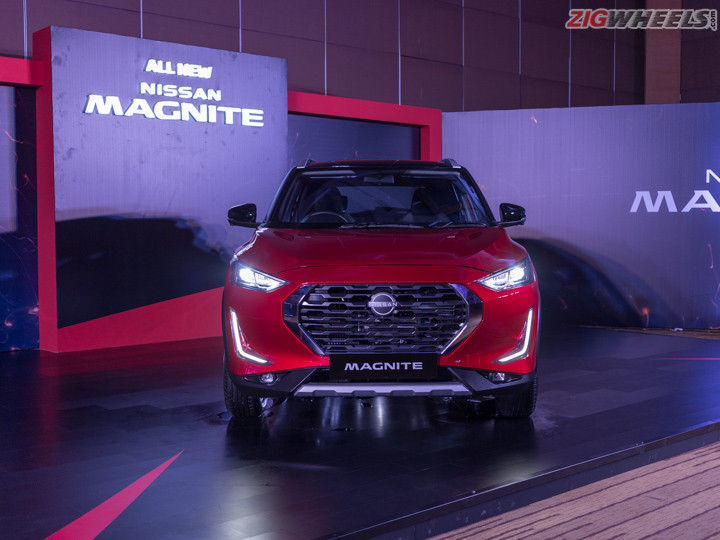 The production-spec Nissan Magnite looks eerily similar to its concept version. That’s no bad thing as the Magnite features the right design elements to make it stand out from its rivals. Sure, you’ll have to wait a while to check out Nissan’s sub-4 metre SUV in the flesh, but until then, here’s a detailed look at its exterior via a series of images:

The Magnite’s piece de resistance is the front-end design. The large grille is reminiscent of a Datsun and there’s some history behind it, but it works here and looks rather bold.

The sleek projector headlamps, MASSIVE L-shaped DRLs, and even the fog lamps feature LED lighting for added bling. Pretty sure it’ll get a thumbs up at night.

The Magnite’s profile is clean with no sharp creases. However, the haunches above the front and rear wheel arches add muscle.

Chrome door handles lend a touch of premiumness. While both front doors feature a request sensor for keyless entry, only the driver’s door comes with a keyhole to unlock the car manually.

Opted for a dual-tone Magnite? The black or white finish depending on the colour you pick extends to the ORVMs.

Take a look at the ‘Nissan Magnite’ badging near the ORVMs. That’s some nice attention to detail!

The roof also gets a dual-tone finish. Speaking of which, the roof gets a cut out in the centre, which flows all the way to the rear spoiler. Sweet!

The Magnite’s tail lamps, which are a straight lift from the concept, are illuminated by incandescent bulbs rather than LEDs.

The ‘MAGNITE’ badging has been spaced apart, giving it a bold look. Note the new Nissan badge placed above it. A butch rear bumper completes the exterior look.

For more details and information on the Nissan Magnite, click here. The Magnite is likely to undercut its rivals in terms of price and could start from Rs 5.5 lakh (ex-showroom). It will lock horns with biggies such as the Kia Sonet, Tata Nexon, Ford EcoSport and Maruti Suzuki Vitara Brezza among other sub-4 metre SUVs.

Beyond the drafting table: Building project benefits students and city