The future of the Ocean Beach Library was the single topic at the OB Planning Board’s regular monthly meeting Wednesday September 7. That future was moved a step closer when the board voted to approve a specific concept for the future library that will move the design and permitting process along.

The meeting was held at the New Break church on Ebers St. where the city of San Diego made a presentation titled “Ocean Beach Library Expansion Survey Results.” The survey was taken to see which of three concept designs for the library expansion and remodel the public preferred. The survey received 44 on-line results and 120 hand held results according to the city. A total of only 164 people chimed in, which seems a pretty small number for all of Ocean Beach.

Concept #2 received 84 votes as the winner. Concept #1 was second at 54 votes and concept #3 received only 26 votes. That means the voices of only 84 people, in all of OB, decided the concept design. But, the result would probably be fine with most people.

The meeting itself was a bit bizarre in some ways even though the end result was agreeable to most. For example, the festivities opened with our councilmember Jennifer Campbell. She was introduced and bounded to the front like a comic emcee has just been introduced. She actually said “Hi everybody, Dr. J here, your councilmember!”

Once the confusion cleared in this writer’s head, it became apparent that Campbell came forward in the Government Reports portion of the regular meeting agenda that occurs at every meeting. The various reports are usually provided by representatives from the city, the county, and even the state.

Campbell’s rep was there but Campbell seemed eager for some spotlight so she gave the report herself. Her report consisted of two things. The first was announcing the council’s support for Proposition 1 on the November ballot. It is a reproductive rights bill, a reaction to the recent Supreme Court decision on abortion. This is the current feel-good bandwagon today, guaranteed to elicit good press.

The second thing Campbell talked about was the vendor ordinance. She just repeated what has been in the news for over a week with nothing new. It looked like she was expecting a big atta girl from the crowd. There was very light clapping. But this was just her prelim, more later.

Once Campbell yielded the stage, two women came forward to read statements during the Non-Agenda Public Comment portion of the meeting. Leigh Eisen, Executive Vice President & CEO of AIA (American Institute of Architects) San Diego spoke first. The second woman was an architect. Both spoke on the same theme, that the city’s decision not to use a professional architect was a mistake and unprecedented.

The architects are very disturbed that the city decided to design the project in-house using a civil engineer. They alleged that this is a highly unusual departure from past practices on city projects. Eisen mentioned several architects in the city who had designed city libraries in the past. They want the city to reconsider this decision, which was the subject of a September 7 OB Rag story.

With a lifetime spent in the construction industry, what the representatives for the architects had to say made a lot of sense. This opinion is based on experience with cities and their internal design capabilities. The idea of doing the design in-house by people who admittedly had never designed a library, and were not architects, sounded like a bad idea.

Until the city began to talk about design-build.

When the city explained that it had chosen the “design-build” contract delivery method, the architect’s complaint began to fade. Simply put, design-build involves one entity designing and building a project as opposed to a project that is completely designed, bid out, and then built by the winner.

In traditional design-bid-build contracting, the contractor and designer are contracted separately with an owner.  A design-build entity consists of a contractor and a designer in a partnership. There are many advantages to this method, the main ones being a much faster and cheaper way to build.

The design may change a lot, depending on ideas from the design-builders, but the main specific features the owner wants will be included. So, the concept design is really just a reflection of what the owner wants, in this case the community of OB, and may not require an architect’s touch.

Since the city only needs to provide this basic concept to begin the permitting process, an architect perhaps is not needed. An architect will become involved once the design-builder is awarded the project and will complete the design then.

After the AIA comments, the floor was given to the city. Shannon Stoks was the city’s spokesperson. She was backed up by several other members of the city’s project team. Before she began, she gave the floor to Cory Bruins, president of the OB Town Council.

Cory came bounding, up much like Campbell, and took the mike to cheerlead the crowd. It felt like being at a self-help seminar. He gave a rousing speech in favor of the project and praised everyone. He was all excited to know that a “community room” was to be included in the design and he got a cheer for that. Even though the interior was not discussed again.

Then, Bruins handed the mike back to Campbell.

Campbell got up and proceeded to take all the credit for the progress on the library project including getting all the money. She said she started working on the library the minute she got into office. She claimed she got $100k and later $500k devoted to the library. This has yet to be fact-checked.

Campbell then took credit for the $4.5 million from the state saying that her close friendship with Toni Atkins made that possible. Also, not yet fact-checked. Then, she said she was working on getting another $4.5 million from the feds through Scott Peters, taking credit before the “ask money” is actually realized.

The budget for the project is $11.9 million. The current in hand total is $7.5 million, the state contribution and a very generous, anonymous $3 million donation. The “ask money” would make up the remainder of the $11.9 million. What was blatantly missing was any contribution from the city of San Diego.

Campbell’s blatant campaign performance was difficult to watch– it was a politician at their worst, hi-jacking a meeting about a library design to promote her own political career. The lack of shame was, frankly, shameful.

The City’s presentation included a time line. It started with a controversial meeting in November 2021, recounted here in The Rag. https://obrag.org/2021/11/public-input-not-allowed-for-new-ob-library-design-is-ocean-beach-getting-the-shaft-again/

The next step in the time line was May 2022 when three architectural concepts were presented at the OB Town Council. This was followed by surveys commenting on those designs collected from May 31 to July 8. This amounted to about five and a half weeks.

The timeline stated, “Friends of the Library and local volunteers participated in community engagement activities (OB Farmer’s Market, Chili Cook-off) to get feedback from interested parties.”

The last step in the timeline was this meeting seeking to get approval from the planning board “to move forward with the Community’s preferred concept.”

Once the OBPB gives it approval, the plan is to develop a coastal development permit submittal. Once the permit is obtained, the city would then begin to hire a design-builder.

A community member asked when actual construction might begin and the city said the fall of 2024. The time in between will be devoted to preliminary design and obtaining the coastal permit and other environmental permits too.

The presentation contained comments on various aspects of the proposed project, the first being landscape options. The survey showed an unsurprising majority favoring drought-tolerant plants. Several survey comments were reproduced on the slides which Stoks, unfortunately, read word for word. She proceeded to do so on all of the following slides.

A commentor asked that the addition match the old library and Stoks said that would actually be a violation of Historic Standards. “The Addition should [be] distinct but cohesive and should not be the star of the show.” Another comment about removing the grass lawn was answered by saying that could not be done because it would also violate the Historic Standards. That’ right, folks, historic grass.

One of the last slides contained ideas that were also read word for word.  These included ideas for a lot of native plant stuff, floor materials that would reduce noise from library carts, and an “Ocean or Ocean Beach themed décor.”

After public discussion the matter went to the board for discussion and a vote. It appeared that the general consensus was to approve the design and keep the project moving along. There were comments on the design but there were no serious objections.

The motion to approve basically said the board approved Concept #2 for the basis for a design-build contract and to use for coastal commission approval.

Once the coastal permit is in gear, the item will come back to the OBPB for coastal permit approval. This gives the board a second look at the project.

The vote to approve was unanimous with one abstention from a board member who is employed by one of the consultants on the project.

The city has posted all the project information at this link https://www.sandiego.gov/OceanBeachLibraryExpansion. 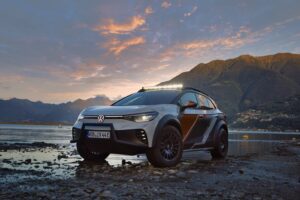 Volkswagen Shows Off Cool EV Concepts For Both On & Off-Road 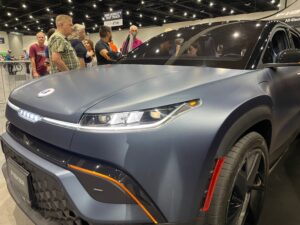 Our First Review of the Fisker Ocean