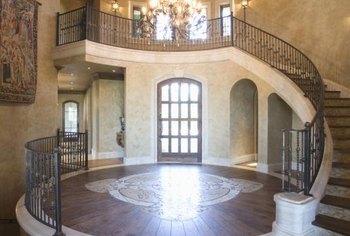 The ceiling, also known as the fifth wall in a room, is a dramatic element in home decor. A palette for architects and decorators, ceiling design is a primary decision when planning a home, but it can also be enhanced after construction. Regardless of a ceiling’s height, it’s open to creative design like the rest of the room.

Originating in the late 1800s, metal panels were added to ceilings as a decorative element. Fabricated to imitate hand-sculpted plaster, these less-expensive alternatives were coated in tin, hence the name. A variety of finishes are available that are easily attached to a ceiling, regardless of ceiling height.

Beams, trusses or system piping are revealed in an exposed ceiling. Wooden beams and trusses found in original construction of older homes lend a sense of history to a room. Fabricated beams made to look like wood can also be attached to a ceiling. Exposed system elements, such as duct work and piping, give a modernist, loft ambiance to a room, creating an open and industrial feel.

A tray ceiling begins as a normal ceiling. The drama begins when it rises, most often in the center of the room, creating a recess of at least 6 inches. Tray ceilings can also be dropped, becoming a floating false ceiling.

Similar to a tray ceiling, a coffered ceiling has several recesses covering the entire ceiling surface. Often lined with decorative molding, coffered ceilings add strength to the room’s construction. Coffers add height and depth to the feel of a room.

An architectural design element, a vaulted ceiling peaks at the center of a room, or follows the roof line. An off-side vault, or a simple angle running upwards to the roof line also adds drama to a room. Skylights and paint enhance the vault.

Originating in Roman architecture, a barrel vault looks like a barrel that’s cut in half and tacked to the ceiling. Found in major rooms of a home or down a long hallway, barrel vaults in natural stone or brick are dramatic. A stark, modernist look for a barrel vault is created with lightly toned or white paint.

Unlike a barrel vault, a domed ceiling opens up a specific area of a room. Often found in tight hallways or above a sweeping staircase, the dome is a blank canvas for a mural. Creative inset lighting or a cascading chandelier adds to the cachet of the dome.

A coved ceiling curves up from the four main walls of a room and leads to the actual ceiling. Coving is applied as a molding attached between the wall and ceiling or is incorporated into the architecture of the room. Usually painted white to match the floor molding, a dramatic effect is achieved with paint or texture. Coves are also found as arches separating one living space from another.

Jann Seal is published in magazines throughout the country and is noted for her design and decor articles and celebrity *in-home* interviews. An English degree from the University of Maryland and extensive travels and relocations to other countries have added to her decorating insight.